Here is my own personal Washington State 2016 Election voters’ guide… 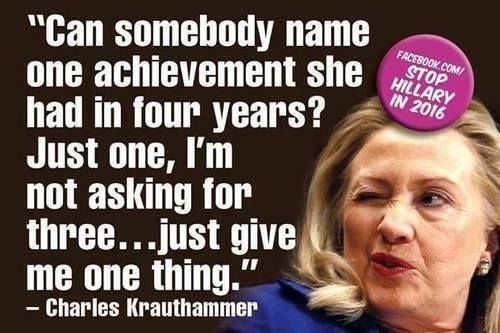 Not Hillary Clinton. The only person with a real chance at beating her is Trump. It’s his only virtue, but it’s enough. Don’t let these criminals into the White House again. Anything that can be said against Trump is even more true of the Clintons. They belong in the Big House, not the White House. Additionally, I am relying upon the fact that Trump will not be able to get anything done. Unlike Clinton, he does not have a party in Congress, therefore nothing will get done. Clinton has accomplices in Washington and they would get things done – all of them terrible for our country. In addition, it is horrible to contemplate what kind of Supreme Court Justice Hillary will appoint. And don’t believe that the Republicans will block all her candidates – they don’t have the backbone to do that.

It’s time to send the Patty Murray home. She serves no useful purpose – she just votes the straight Democrat party line with no consideration for what it means. Vote for Chris Vance.

Jaime Herrera Beutler is one of the few people in Congress that I like. Send her back for another term.

Bill Bryant, a successful small businessman and conservationist. Obviously. A vote for Inslee is to vote for a continuation of the mess we are already in. Bryant’s not exciting, but he’s our only hope of extricating ourselves from this mess.

Marty McClendon has a legitimate shot at becoming Governor in the future. Habib, on the other hand, is just another knee-jerk liberal – another lawyer. McClendon has actually held jobs and worked in the business community.

No contest at all. Tina Podlodowski is a George Soros (via Emily’s List) funded far-leftist. Absolutely not! Kim Wyman is the only rational choice.

This is an unusual race – a choice between two Republicans.I have to give the nod to Michael Waite who manages money in the real world. I’m uncomfortable with Duane Davidson who seems to be too much of the creature of the state government.

Mark Miloscia switched parties from D to R, feeling that the Democrat party is no longer Democratic. He has principles and intelligence. Pat McCarthy, on the other hand, is another Soros-funded radical – we certainly don’t need another one of those in an important position!

Have to hold my nose and vote for Josh Trumbull. He has no experience and not much of anything… his only qualification is that he’s not a total far-left radical.

Steve McLaughlin is not a tree-hugging global-warming extremist.That’s all that’s necessary to make him the right choice over Hilary Franz.

Heaven help us. The only options are both left-wing radicals. Sigh. Erin Jones seems to be the lesser of the two evils.

Mike Kreidler is the incumbent state Insurance Commissioner. Happy with the state of health insurance in our state? Vote for him. If you’re like the rest of us, you want some relief from Obamacare – and this Democrat certainly isn’t going to do that! Vote Richard Schrock.

Yawn. This is a no-brainer. Lynda Wilson is the only viable choice.

Vicki Kraft. It’s odd that the people so eager to put a crook in the White House just because she is a female have just the opposite position on these two women who deserve the positions based on principle and being the right person for the job instead of just because of their gender.

Paul Harris is the only candidate – his ‘opponent’, Martin Hash, even scares Democrats.

Even the ACLU doesn’t like this one. It sounds so reasonable… yet is so bad. Great information at Know I-1491. Vote No.

Voters might be left with the impression I-1501 is the brainchild of consumer or privacy groups in response to a surge in identity thieves bilking elderly or disabled people.

In fact, the measure was conceived and bankrolled entirely by the Service Employees International Union (SEIU) – one of the most thuggish unions in the country. They’re upset because they want to force Washington in-home caregivers to pay them dues. The passage of this bill which they created would prevent notification of these caregivers that they are not obligated to pay these dues.