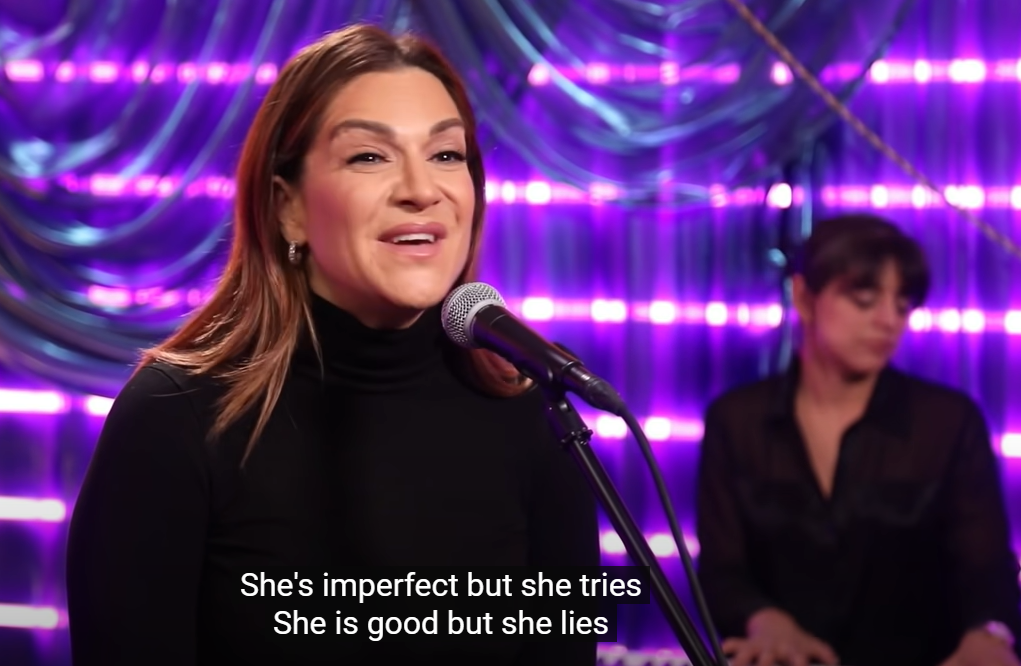 I am so grateful that Maggie Renee introduced me to Shoshana Bean’s rendition of “She Used to be Mine,” a song from the musical “Waitress” with music and lyrics by Sara Bareilles and a book by Jessie Nelson. The musical is based on the 2007 film of the same name, written by Adrienne Shelly. It tells the story of Jenna Hunterson, a baker and waitress in an abusive relationship with her husband, Earl. After Jenna unexpectedly becomes pregnant, she begins an affair with her doctor, Dr. Jim Pomatter. Looking for ways out of her troubles, she sees a pie baking contest and its grand prize as her chance.

Sara Bareilles has been a favorite of mine. She was one of the judges on the all-too-short-lived a capella competition show, “Sing-Off” during the 2011 season which saw Pentatonix walk away with the prize – only to be rejected by Sony because they didn’t think a capella had a market. The joke is on them, however. Success is the sweetest revenge. I have watched those episodes repeatedly over the last couple of years because of the respectful attitude toward the competitors by the judges and the competitors themselves.

Then I watched her performance on YouTube of “Yellow Brick Road,” a beautiful re-thinking of the Elton John classic. Oh, my goodness! So incredible! It was about that same time that I began reading about “Waitress” though I did little about it. I watched a couple of YouTube videos of the music and really enjoyed it, but that one song, “She Used to be Mine” stuck in my mind. Then, just a few weeks ago I watched the movie that started it all. I loved it and immediately dug back into the music.

“She Used to be Mine” has been covered by many, many people. It’s winsome and powerful and wonderfully tender. I provide a link below to Morissette’s rendition, but Shoshana’s performance stands alone in its power and beauty. I also provide links to a few of my favorite Youtube music reactors who have ooh’d and aah’d through the performance, each filling in bits and pieces of information that have deeepened my appreciation for the song and the performance. As I mentioned earlier, it was Maggie Renee’s reaction that really got to me.

Nine different women have played the part of Jenna since the play opened; Shoshana is one of them. I have heard four of their performances – all exceptional – as well as Morissette Amon’s version which had been my favorite until I heard Shoshana’s.

Maggie Renee, vocal coach and Juilliard trained opera singer. I love her reactions and analysis. She branded Shoshana’s performance “one of the best performances I’ve ever heard.”

Jessica McKenzie of Soprano Notes dives deep into the technical aspects of performance and singing. Her reaction to this video is really something special! It should not be missed!

Tara Simon, a vocal coach, singer and analyst. She offers great personal and technical evaluations of the performances.

Sara Bareilles wrote the entire musical and performed as Jenna in the first season. This is the official music video.

Don’t miss Morissette’s “Akin Ka Na Lang” or her rendition of “Could You be Messiah!“!

Baby It’s Cold Outside with VoicePlay!!!!
All I Want for Christmas. (Mariah Carey cover)