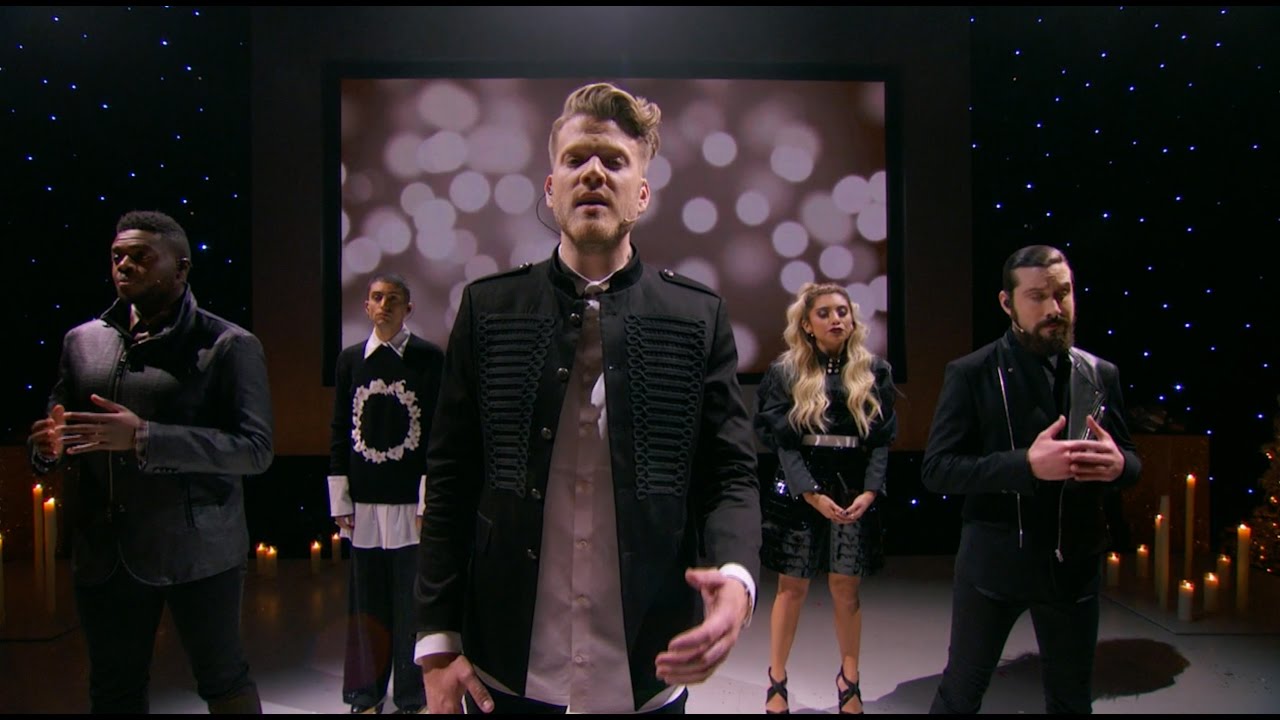 Pentatonix occupies the tip-top echelon of a capella groups. Three high-school friends, Scott Hoying (baritone), Mitch Grassi (tenor), Kirstin Maldonado (alto) decided to participate in the Sing-Off a capella competition television show, but they knew that they would need more members – specifically a bass singer and beat-boxer. A mutual friend introduced Hoying to Avi Kaplan, a highly recognized vocal bass in the a cappella community. Then, they found a YouTube video of Kevin Olusola in which he was simultaneously beatboxing and playing the cello (called “celloboxing”). The immensely talented Olusola (he graduated pre-med from Yale University and speaks fluent Mandarin) clearly filled the bill. The five met for the first time the day before auditions for Sing-Off and went on to win the 2011 season. The name Pentatonix reflects the pentatonic scale, a musical scale with five notes per octave as well as representing the five members of the group.

One of the rewards for winning the competition was supposed to be a contract with Sony Music, but Sony – probably thinking that there was not a large market for a capella – dropped them. The group formed its own YouTube channel, distributing its music through Sony’s Madison Gate Records. Their YouTube channel currently has over 19 million subscribers. The group’s video tribute to Daft Punk, which won “Best Arrangement” in the 57th Annual Grammy Awards, has received nearly 355 million views.

In May 2017, the band announced in a video that Avi Kaplan would leave the group following their upcoming tour. he last performed with Pentatonix on September 3, 2017, in Essex Junction, Vermont. On October 13, Matt Sallee joined the group as their new bass singer.

I was first introduced to their Christmas music by my brother-in-law, Ed, who has since passed and is greatly missed. A life-long lover of a capella music, I was immediately captivated and became a Pentaholic on the spot. I continue to love their music all these years later.

It must be said that Hallelujah IS NOT a Christmas song, nor is it even a religious song. Leonard Cohen just used words and imagery from the Bible. He was a non-observant Jew but said he had a fondness for Christ because he was touched by His generosity and could not comprehend Him. According to Cohen, it took five years to finish the song, writing 80 verses and discarding them before finally settling on the six though only four made it to the studio. So I have no idea why PTX included the song in a Christmas album.

Maggie Reneé always has great reactions as an opera singer and music lover. Her irrepressible good humor and bubbly spirit make spending time with her a joy. This was her introduction to Pentatonix.

Audrey from Songs from a Suitcase, a vocal coach, reacts and analyses the live performance instead of the music video. If you are a Glee fan, check out her channel because she has LOTS of Glee reactions. She is one of my favorite reactor/analysts.

I always enjoy Julia Nilon, a flaming redhead vocalist and Contemporary Singing Specialist, offers reactions and analysis from Down Under. She admits that this video contains a lot of fan-girling.

Jess of Soprano Notes, an opera singer and vocal coach, expressively shares her enthusiasm and analysis. Always fun and interesting.

Elizabeth Zharoff of The Charismatic Voice, an international opera singer, vocal coach, music writer and award-winning audio designer – not to mention a native of the great state of Washington – ranks as my number one favorite reactor and analyst, though I must admit that it is a very crowded field. All the reactors listed on this page are very special to me. She is also reacting to the live performance.

With, at this writing, nearly 197 million views, here is Leonard Cohen performing Hallelujah live in London in 2009.

The Sound of Silence, a cover of the Simon and Garfunkel mega-hit. Absolutely amazing.
Daft Punk. I mentioned this video above.
Havana. So cool!
Say Something.. It makes me want to give Kirstie a hug every time I listen to it.
Amazing Grace (My Chains Are Gone). So gorgeous.
Bohemian Rhapsody. Who would have thought that an a capella group could do justice to this marvelous song? But they did!
Mad World. Fantastic.
Royals. So much fun.
Thrift Shop. Safer lyrics than the original.
Radioactive – Pentatonix & Lindsey Stirling. One of my absolute favorites.
Papaoutai – Pentatonix & Lindsey Stirling. They can sing French! with Animation!

Mary, Did You Know the second best (in my opinion) ever version of this great Christmas song.
You’re A Mean One, Mr. Grinch.
Where Are You, Christmas?
Little Drummer Boy. Love this!