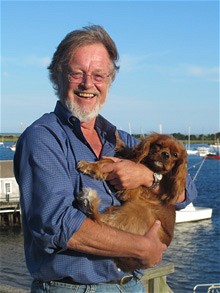 My favorite author of historical fiction with over 57 books published. 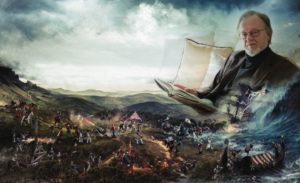 Cornwell got his literary feet wet by emulating C.S. Forester’s Hornblower novels, which he loved. “I grew up learning British history, and I guess that’s what fascinates me. I’ve been reading history all my life, but I’m not a historian, I’m a storyteller,” he says. Enter Richard Sharpe, a swashbuckling “loose cannon” British soldier (also an orphan) during the Napoleonic wars, and hero of what would become 24 books in Cornwell’s Sharpe series, as well as a popular television series featuring Sean Bean as the indomitable Sharpe. In addition to the Sharpe novels and the Saxon Stories, Cornwell, often at a pace of two books a year, has penned historical novels about the American Revolution, the Civil War, and one nonfiction book on the battle of Waterloo—all meticulously researched and masterfully told.
History’s Henchman, Charleston Magazine. March 2017

A sprightly 67, with the tanned complexion of a seafarer, a scraggly white beard and a throaty laugh, Cornwell could be forgiven if he wanted to put his feet up and take it easy – or at least indulge himself in more leisurely interests than writing meticulously-researched historical fiction.
A Page in the Life: Bernard Cornwell, The Telegraph. 15 Sept 2011