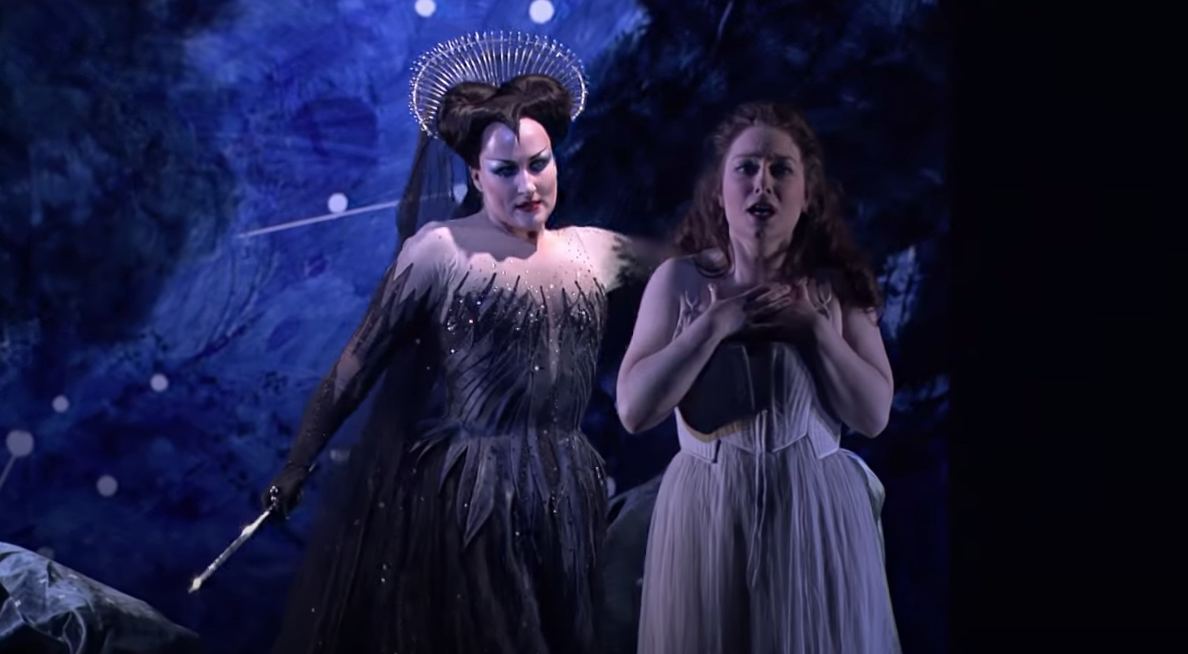 The Queen of the Night Aria, written for Mozart’s sister-in-law Josepha Hofer, is famed in opera circles as the highest and perhaps most difficult ever composed. Wolfgang Amadeus Mozart’s aria from The Magic Flute stirs almost universal recognition because of its fame and wide usage.

I don’t know a lot about opera, but even I immediately recognized this aria and was totally impressed by the performance and the costuming. I have watched this clip several times since my first exposure and love it.

From Mozart.com:
Mozart had fallen on hard times. He was constantly worried about money and Constanze’s health and struggled with feeling not fully appreciated. 1790 was a hard year. Like so often he composed just for the sake of composing – having no official commissions. The situation looked increasingly dire. Finally an old friend, the actor, singer and poet Emanuel Schikaneder, made an appearance. He was looking for a new play and knew exactly what the audience wanted: a play about magic, all the rage in Vienna!

Both set to work. Emanuel Schikaneder wrote the libretto, Mozart composed. “Die Zauberflöte”, “The Magic Flute”, was to become one of the most popular and most performed operas in history. Even today the audience is not averse to being spirited away into a fairy-tale realm of magic, love and humour – typically Mozart!

Papapapapapageno!
Pamina, the daughter of the Queen of the Night, is abducted by Sarastro, who is charged with taking care of the legacy of the Sun King. The beautiful prince Tamino is sent to free her. This is not an easy task. A giant serpent chases him and he swoons. When he regains consciousness, the monster is dead and the bird-catcher Papageno makes an appearance. Tamino is convinced that Papageno, who does not contradict him, killed the snake. Three ladies give Tamino a portrait of Pamina. He immediately falls in love and promises the Queen of the Night to free her from Sarastro’s clutches. Papageno is to come with him. They receive a magic flute, the magic of which tames wild animals, and magic bells to protect them on their journey to Sarastro’s palace.

Sarastro declares that he only abducted Pamina to protect her from the – in his eyes – evil Queen of the Night. Tamino and Pamina are destined for one another. He wants to ordain Tamino to be a priest at the temple of wisdom, but he needs to prove his worth by first passing various tests. Finally Tamino and Pamina pass through the “gate of terror”, overcome fire and water and are accepted into the ranks of the enlightened.

Papageno also experiences the bliss of love. He encounters Papagena and the two fall in love. And the Queen of the Night? She is obliterated trying to destroy Sarastro’s temple. “The rays of sun chase night away…”

Humanist ideals vs. Punch & Judy opera
At first glance, Mozart’s “Magic Flute” appears to be a typical Viennese magic or “Punch & Judy” opera, but it is much more. With the triumph of good over evil, the serious scenes of the choir of priests – reminiscent of a gathering of freemasons – and a production that was unfamiliar to the contemporary opera audience of Mozart’s time, the work is deeply imbued with humanistic idealism. The elevation of the genre and the evident display of freemasonic ideals at first did not cause a stir among the audience of Vienna’s bourgeoisie. But reservation quickly made way for enthusiasm and the opera became increasingly successful. Apparently, this Mozart opera also needed some time to be fully appreciated in all its depth…

At that time, Wolfgang Amadeus Mozart had already given in to resignation. Again, his peers were incapable of grasping and appreciating his genius. His health was in a bad state, he felt depressed and feared “… that soon all music will stop”.

During his work on “The Magic Flute”, Mozart received commissions for two further works, which he accepted. He was to compose a requiem for an anonymous patron and the opera “La Clemenza di Tito” for the coronation of King Leopold in Prague.

About Diana Damrau:
Diana Damrau is a German soprano who achieved international fame for her performances, primarily in opera, but also in concert and lieder. She has received numerous awards and honors over the years. She is best known for this role, the Queen of the Night, but has performed literally dozens of roles around the world, all to great acclaim. She combines astonishing technique, a marvelous natural voice enhanced with dedicated training and wonderful acting skills.

Elizabeth Zharoff‘s reaction to the video. This is great because she is an opera singer who has sung a different role in the same opera and has met and worked with Diana Damrau.

Maggie Reneé, another opera singer and a favorite reactor with a wonderfully fun and bubbly personality.