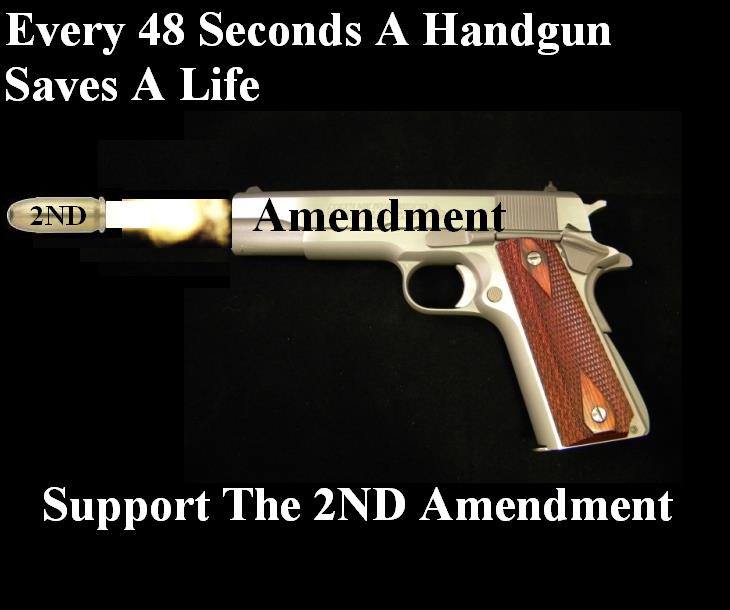 Law-abiding citizens use guns to defend themselves against criminals as many as 2 million times every year — or about 5,479 times a day. This means that each year, firearms are used more than 80 times more often to protect the lives of honest citizens than to take lives.

Of the 2 million times citizens use their guns to defend themselves every year, the overwhelming majority merely brandish their gun or fire a warning shot to scare off their attackers. Less than 8% of the time, a citizen will kill or wound his/her attacker.

As many as 200,000 women use a gun every year to defend themselves against sexual abuse.

Armed citizens kill more criminals than do the police every year (1,527 to 606). Readers of Newsweek learned that “only 2 percent of civilian shootings involved an innocent person mistakenly identified as a criminal. The ‘error rate’ for the police, however, was 11 percent, more than five times as high.”

Dr. Gary Kleck and Marc Gertz published “Armed Resistance to Crime: The Prevalence and Nature of Self-Defense With a Gun” in the Journal of Criminal Law and Criminology, Northwestern University School of Law, 1 (Fall 1995):164. Dr. Kleck is a professor in the school of criminology and criminal justice at Florida State University in Tallahassee. He has researched extensively and published several essays on the gun control issue. His book, Point Blank: Guns and Violence in America, has become a widely cited source in the gun control debate. In fact, this book earned Dr. Kleck the prestigious American Society of Criminology Michael J. Hindelang award for 1993. This award is given for the book published in the past two to three years that makes the most outstanding contribution to criminology. Even those who don’t like the conclusions Dr. Kleck reaches, cannot argue with his impeccable research and methodology. In “A Tribute to a View I Have Opposed,” Marvin E. Wolfgang writes that, “What troubles me is the article by Gary Kleck and Marc Gertz. The reason I am troubled is that they have provided an almost clear-cut case of methodologically sound research in support of something I have theoretically opposed for years, namely, the use of a gun in defense against a criminal perpetrator…. I have to admit my admiration for the care and caution expressed in this article and this research. Can it be true that about two million instances occur each year in which a gun was used as a defensive measure against crime? It is hard to believe. Yet, it is hard to challenge the data collected. We do not have contrary evidence.” Wolfgang, “A Tribute to a View I Have Opposed,” The Journal of Criminal Law and Criminology, at 188. Click here to read Wolfgang’s full article.

Wolfgang says there is no “contrary evidence.” Indeed, there are more than a dozen national polls — one of which was conducted by The Los Angeles Times — that have found figures comparable to the Kleck-Gertz study.

As for Dr. Kleck, readers of his materials may be interested to know that he is a member of the ACLU, Amnesty International USA, and Common Cause. He is not and has never been a member of or contributor to any advocacy group on either side of the gun control debate.

2 thoughts on “Handguns Save Lives”