I love a good book. Libraries and book stores are favorite haunts. Here I am going to list some of my favorites. 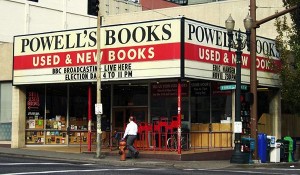 Powell’s City of Books
It’s a wonderful thing – several large book stores… huge bookstores. The City of Books on Burnside is, of course, the flagship but the Technical Bookstore (now just called Buildling 2 – which is ridiculousj) is marvelous. There are also the Home and Garden book store nearly next door to the Hawthorne store plus the Cedar Hills Crossing store and the store at the airport. Absolutely huge. Powell’s claims to be the largest independent used and new bookstore in the world.

In terms of number of titles offered for sale, The Worlds Biggest Bookstore (honest, that’s the name!) at 20 Edwards Street in Toronto claims over a million titles. I’ve been there; it’s a very large book store. Not as much personality, however, as Powell’s or other independent book stores I’ve been to. 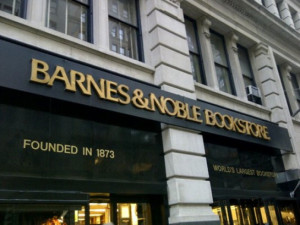 In terms of square footage of floor space, Barnes and Noble at 105 5th Avenue in New York witht 154,250 square feet and 12.87 miles of shelving was number one until they closed. I don’t know who has claimed that title now of largest book store in terms of square footage. I am very fond of Barnes and Noble as it is the only decent bookstore left in Vancouver, but I prefer independent book stores like Powell’s or…

While Away Books and Espresso in my hometown of Roseburg, Oregon. It’s a small but comfortable place crammed full of books. I never go to Roseburg without a visit. I desperately wish they were located in Vancouver! 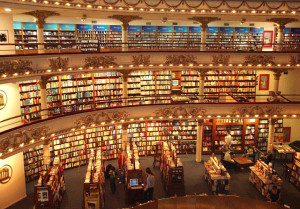 Just for fun, I’ve included a book store that is beautiful. I’ve never been there but would like to visit someday just to spend a few hours in the stacks. It is El Ateneo in Buenos Aires